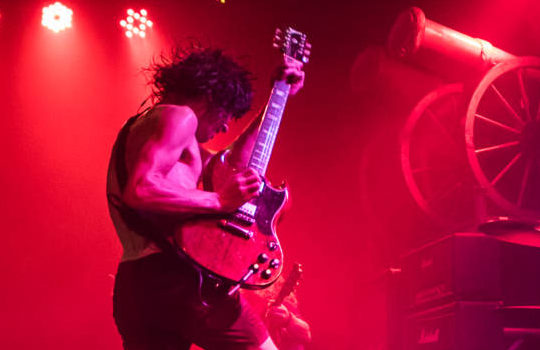 The hugely successful and unique six-man tribute to rock music’s greatest band AC/DC, complete with cannons, a wall of Marshalls amps and over two hours of High Voltage Rock ‘n’ Roll in a show critically acclaimed for its closeness in look and sound to the real thing.

Both Bon (Dave) and Brian (Podge) are present on the Rock and Roll train for a night to remember and with the Rhythm section ‘locked in’ the freedom of the stage and the music is given to Simon as Angus Young who gives an uncanny performance with meticulous detail in appearance, energy and his note for note heartfelt renditions in a night of bedevilled Rock and Roll.

The band aim to put you slap bang in the middle of the show with hit after hit, and you are expected to join in! There’ll also be one or two gems thrown in for the aficionados! We’d be hung, drawn and quartered if we didn’t play all the classics, Back in Black, Rosie, Highway to Hell are all there, and the songs keep on coming until the cannons fire ceremoniously to bring the evening to a superb crescendo. If by this time you are still standing…we salute you! Long Live AC/DC, Long Live LIVEWIRE!

Refunds
In common with general theatre practice, we regret that tickets cannot be exchanged or refunded after purchase, except where a show is cancelled. We can accept your tickets for resale, but the venue’s unsold tickets will take priority. A charge of £1.00 will be made if tickets are sold on your behalf.

Reservations
Tickets can be reserved for a period of 7 days. No unpaid reservations can be accepted in the 4 days prior to a performance.

Latecomers
To avoid disturbing the audience and performers, latecomers to some shows may not be admitted until a suitable break in the performance.